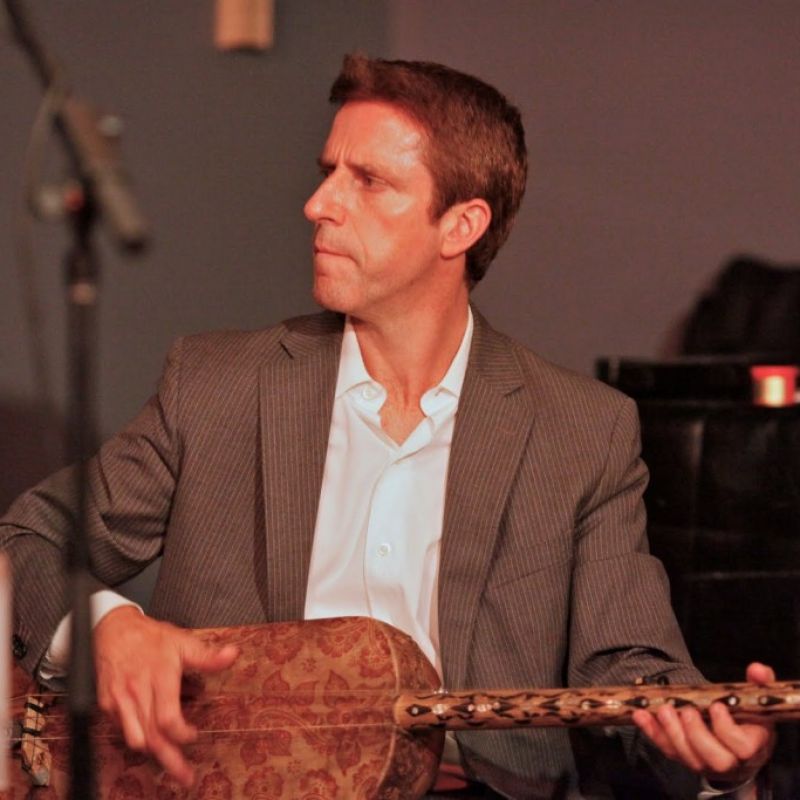 Perhaps the only musician to have performed with big band legend Cab Calloway, Frank Zappa discovery Wildman Fisher, gnawa master Hassan Hakmoun and two members of the Velvet Underground, (though sadly, not all at the same time), bassist /composer Mike Rivard defies easy categorization and finds himself at home in a bewildering array of settings: From the low-rock of Morphine to the mountains of Morocco with local Berber musicians, with side trips into the Broadway pits of The Lion King and Wicked to sitting in with Medeski Martin & Wood.

Growing up in the wide expanses of Minnesota he assimilated the local sounds of Prince, Husker Du, and free- jazz coming out of the Dinkytown/University of Minnesota milieu, before heading to Boston’s Berklee College of Music in 1981. While enrolled as both a composition and bass performance major, saxophonist Russ Gershon recruited him for his band Either/Orchestra, with which Rivard recorded four CDs and got his first taste of national touring. Through the E/O he also met and befriended two people who would remain prominent in his musical life for years to come: John Medeski and Mark Sandman.

After Berklee, Rivard received a scholarship to study with jazz great Dave Holland at the Banff School of Fine Arts in Alberta, Canada. Upon his return to Boston he joined Sandman’s band Hypnosonics and quickly became the go-to guy for producers such as Jon Brion and Mike Denneen in the late 80s/early 90s local indie scene based around Q Division and Fort Apache Studio. He began a busy session schedule that included major label releases for The Story, Jen Trynin, Morphine, Patty Larkin, Guster, and Aimee Mann, amongst others. More national and international touring followed with Jonatha Brooke, Paula Cole and world/jazz group Natraj.

Feeling equally at home on upright and electric basses, he found himself highly sought after for his quick ear and ability to read and to improvise, to play with a bow, as well as for having a knack for coming up with quirky, creative approaches to any musical setting, including the use of effects and extended techniques such as preparing the bass with the use of sticks and alligator clips. Maintaining an “anything goes” attitude, he is also able to adjust to more structured situations such as the Boston Pops Orchestra, with whom he has been the regular Rhythm Bassist since 2009, backing up artists such as James Taylor, Susan Tedeschi, Carly Simon, Melissa Etheridge, Bernadette Peters, Tom Morello (Rage Against the Machine), Tom Sholz (Boston) and Toby Keith.

Throughout the 90s and into the next decade he recorded and performed with a wide array of artists including folk icon Linda Thompson and son Teddy Thompson, soul & blues great Mighty Sam McClain, J.Geils singer Peter Wolf, G Love, Catie Curtis, Shawn Colvin, Dar Williams and jazz drummer Rakalam Bob Moses. Inspired by the North African gnawa music that Sandman turned him onto, he picked up a Moroccan sintir (three-stringed bass lute) and with guidance from Hassan Hakmoun and malaam Mahmoud Guinia, he has become one of a handful of western musicians proficient on the instrument and has added it to his low-end arsenal, which also recently includes a bass kalimba (inspired by Congolese band Konono °1).

He puts all of these instruments to good use in Club d’Elf, the jazz-world-dub-electronica collective he formed in 1998, producing eleven CDs for the band over the past eighteen years. The band has toured internationally and won numerous awards, and has featured many guests including Medeski, Sandman, Hakmoun, Ryan Montbleau, Marc Ribot, DJ Logic, and Marco Benevento. Rivard received a grant through the US State Department to travel to Morocco in December 2009 as part of a cultural delegation, continuing his love for the music of that region and inspiring the 2011 Club d’Elf release Electric Moroccoland/So Below, which rose to #1 on the Relix charts and drew praise from Afropop Worldwide, Voice Of America and PRI’s The World amongst others. He also is a founding member of world/jazz/folk ensemble Grand Fatilla, and co- produced their CD, Global Shuffle. In July 2015 he made his debut with the Boston Symphony Orchestra, performing Duke Ellington’s orchestral piece “Harlem” at Tanglewood. Most recently he has been mixing a new Club d’Elf release and playing bass on the road with Ryan Montbleau‘s band.

From world music with Hassan Hakmoun to free-jazz with the late Joe Maneri; from folk/country with Lori McKenna to live group improvisation with the Everyone Orchestra, Rivard treats each situation with the same level of respect, musical curiosity and deep understanding of the bass and its role in all styles of music.

As a special guest Mike Rivard contributed to: