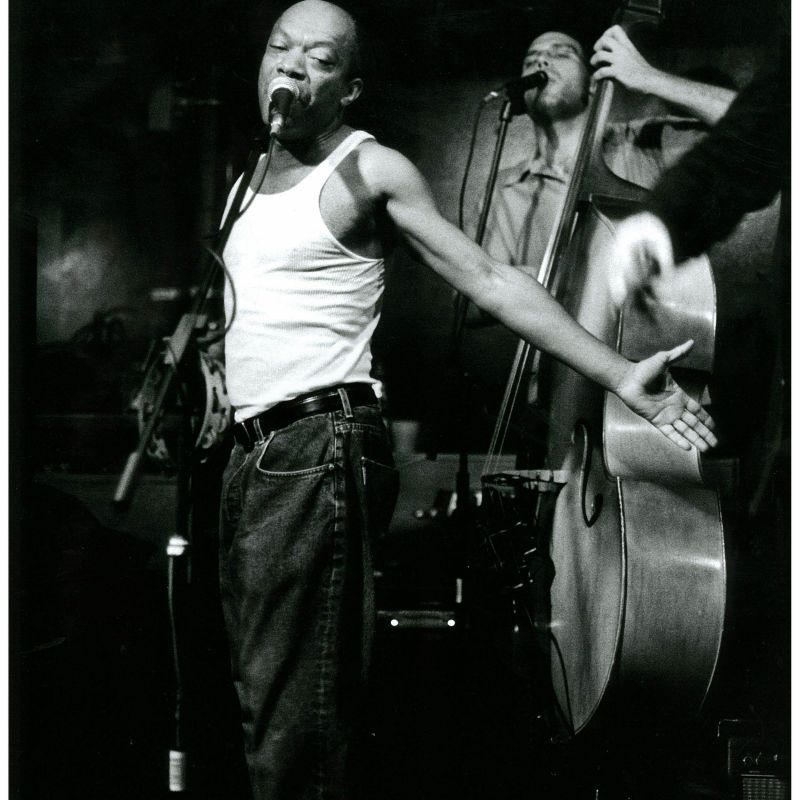 Kemp Harris defies categorization. He is a singer and songwriter, a master weaver of American musical styles. He’s an actor, activist, author, and storyteller, and an award-winning educator who has taught young public school students for more than 40 years.

“It’s all about communication,” Kemp says. “Everything I do.”

Born in segregated Edenton, North Carolina, and transplanted to Massachusetts, where he bounced between relatives’ homes, Kemp learned to adapt to whatever world he found himself in - a talent that has come to define him as a person and an artist. He began writing songs at 14 and recording them in college, using a pair of old cassette players to track parts, and has been delighting music lovers ever since with his earthy, soulful creations.

Kemp honed his powerful, intimate performance style in Cambridge’s coffeehouses, developing into a magnetic frontman who has shared stages with artists such as Koko Taylor, Gil Scott-Heron, and Taj Mahal. He has composed original music for the Alvin Ailey American Dance Theater and Complexions Contemporary Ballet, established a songwriting residency at Boston’s Wang Theater, and recently delivered a series of master classes at Berklee College of Music on the subject of Artists as Activists, alongside Chad Stokes of the band Dispatch and members of the dance troupe Urban Bush Women.

Kemp’s most recent album, Edenton, featuring vocals from the legendary Holmes Brothers, is a modern blues journey that fuses the personal and the political, the sacred and the profane, to haunting effect. Edenton’s title track, a bittersweet valentine to his birthplace, explores a simpler time in a racially-divided town with the clear-eyed grace that is a hallmark of Kemp’s work. Everything he makes is built on a foundation of social awareness and the desire to reflect the world as he sees and experiences it. Whether he’s performing a rousing soul tune backed by a 14-piece orchestra in a grand concert hall or a hushed meditation alone at his piano, Kemp speaks truth the only way he knows how: by baring his soul. Considering the state of the world, it is no wonder Kemp is back on the road playing to the biggest audiences of his life - selling out rooms from Northern New England to New York City and enjoying a wave of new fans who have discovered this seasoned Renaissance man via word of mouth.

“Nobody tries to pigeonhole me,” says a delighted Kemp, clearly thrilled to be taking his career to the next level. “My audience allows me to be myself and do it all.”

This resurgence spans all facets of Kemp’s creative life. On top of his busy concert and storytelling schedule, he recently landed acting roles in the feature film “Bleed for This” and the hit Showtime series “SMILF,” as well as a coveted slot in WGBH/PBS television’s storytelling series “Stories from the Stage.”

Kemp’s powers of observation, his unique gift for shining a light on the modern world and what it means to be alive, have only deepened over a lifetime devoted to the most basic and profound of pursuits: human connection. Whether he’s in the classroom, on a film set, leading a workshop, or performing on the concert stage, “at the end of the day,” Kemp says, “I’m an old black man telling stories and spreading the love.”

Here's what the press is saying...

Kemp Harris is a thief, a tease and a heartbreaker. He knows too much. And its all right there when he sings. Beautifully there. He'll take your breath away.

Earthy, insightful, haunting...sacred and profane. Harris is in perfect communion with the Holmes Brothers and his earthy band.

Harris has his finger on the pulse of the modern world with an intensity born of awareness, and he writes with an understanding of what our lives lack. He delivers this wisdom with a timeless voice.

That place was buzzing...a performance for the ages! What a night! Kemp is the real deal."

As a special guest Kemp Harris contributed to: